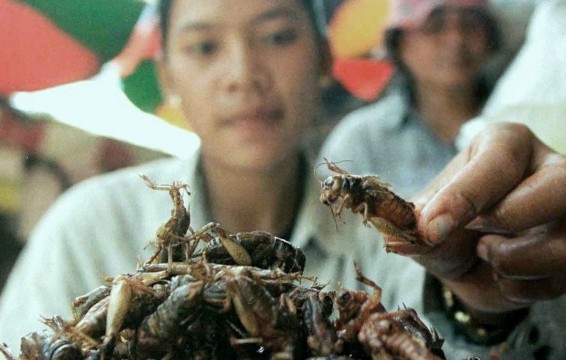 If true, obese and overweight people may longer need to queue up in front of a gym or health stores to lose their resistant weight, but they may need to go into the woods and start eating insects.

Yes, you read that correct, snacking on some nutrition filled insects can help you ward of the excess weight as per researchers.

Many of us might have viewed with disgust how some reality contestants munch on caterpillars, killer ants, cockroaches and beetles for the sake of winning a million dollars and now the very same awkwardness might have come back to bite out fat rear end.

However it is true as the writers of the Forestry Department in an UN report have highlighted that some of these nutrition filled insects can be our ally in fighting obesity. As per the report of the FAO section of the UN quite a few insects were comprised of the exact same volume of protein and nutrients as other animal meat plus more healthy fats that nutritionists advise in a balanced diet. It is worth mentioning here that many of the insects that are considered nutritious are already used as food in African countries and in China, but are looked down upon in a few countries, especially the West.

According to a World Health Organization report it is the rich people and their kids who are most affected by obesity and weight problems. With this in mind many European restaurants have included exotic and nutritious insects in their menus like fermented grasshoppers. W.H.O is also encouraging selective insect farming. This is actually good news for poor farmers in the third world countries as they can now export the insects and earn good profits. The good part about this is that insect farming is not as land-dependant as other forms of farming like livestock. The WHO estimates that women farmers will benefit the most out of this in the developing countries.

A research carried out by an expert panel concluded that our food choices are psychological. As a group of blindfolded people happily munched on insect snacks till they were told what they were eating. This goes to prove that if we set our minds on the benefits of these nutritious insects and they were presented in a eye pleasing manner people will lose their inhibitions on eating insects, said one expert who conducted the research.

So now the obese people can look forward to another method to shed their extra fat.