Open Up To Your Kids About Sex

Adolescence in itself is such a challenging phase.To ask your teenager to clean up that messy room is also a debatable suggestion. But children need the guidance of their parents to assist them make appropriate, justified and healthy decisions about their sexual life. 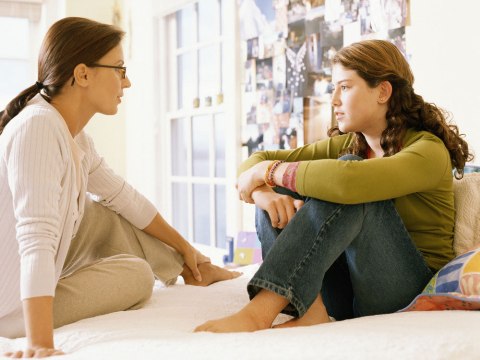 Though there is a school system in place to educate them about sex. Magazines, television, the internet and other kids will be constant sources in enlightening them about the same. But there is no other source as safe and knowledgeable than parents.

In this way you can at least control the accuracy and honesty of the knowledge you impart. There is no script you could possibly download from Google. However, you could take the following steps into consideration while having a heart to heart chat with your child regarding sex.

When your child is around 7-8 years of age, their curiosity is at its peak, especially about how they were born. It is a big task for you too, but do not leave these questions unanswered. When there is an intimate scene on the television and your child innocently asks the basics of such an existence open up and be honest. Impart knowledge in the most decisive and diligent way possible.

If there is a program on TV or a video that is talking about responsible sexual behavior, pick your chance and use this moment as your opportunity. Every day events like picking up groceries or riding the car can also offer the simplest moments to break the finer facts.

If you are caught lecturing your teen, you’d probably not speak a word since he/she has already tuned out. The deal with this age group is that, mistakes will occur and they will fall and get up on their own. But do remember to not involve the word ‘don’t’. It is human psyche to do the exact opposite of what has been asked not to do.

Go slow and do not make things awkward. It is a personal zone and some things are better kept as secrets. The words to stress more upon are the facts, the safety measures and the consequences. Once they know the counter effects of doing something stupid after a couple of drinks in a party, they’d be able to make a wiser move for themselves.

Do not indulge into their sexual history directly. Ask them about their friends and the developments they have in the field. Once you get the ball rolling, the momentum will set in. Then rather than asking them questions, you’d be the one answering theirs.

To find out that your teen is gay may make things a little miserable for both of you. But establish an open ground for communication. They probably need your love and compassion most at this point in life than they ever will.

Be open and make sure you are not the only one speaking. Let it be a dual approach. If there is constant nodding from your teen, he/she might be available physically but they have switched their brains long ago. The perfect approach to this is to be as comfortable as possible. It is not a PowerPoint presentation to impress your boss.

In the end just remember to keep the conversation real, by moving beyond the facts and knowing their point of view. It is not rocket science but it is definitely more important than that.