Xgeva (denosumab which is a monoclonal anti-body that holds on to the protein, RANKL needed for the constant maintenance of a healthy bone), marketed by Amgen, has become licensed by the FDA, U.S. for the management of GCTB (or giant cell tumor from the bone) in grown-ups and skeletally older teenagers. GCTB is a rare growth that is generally non-cancerous. In 2010 Xgeva was approved by the FDA to prevent fractures whenever cancer spread towards the bones. 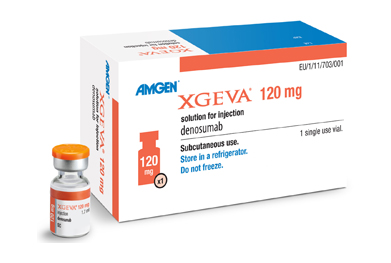 Within most of instances, GCTB remains localized and doesn’t distribute. However, because it grows this destroys regular bone, leading to severe discomfort, bone cracks and a restricted range of motion. GCTB may become malignant as well as spread towards the lungs, this really is rare.

The Food and drug administration explained that Xgeva has become authorized for individuals with unresectable GCTB, which means the growth cannot be eliminated surgically, or even when surgical treatment is not suggested due to a likelihood of serious morbidity, for example removal of joint or lack of limbs. In the event that not dealt with, GCTB generally brings about the entire destruction of affected bone fragments, resulting in bone fracture, joint-dysfunction, disability or amputation. Xgeva must only be used within patients in whose bones matured.

Authorization of Xgeva supplies a much needed therapy choice for individuals with GCTB who aren’t surgical applicants or who’d otherwise need to undergo substantial, life-altering surgery.

Xgeva had been evaluated under the FDA’s priority evaluation program, which supplies a faster report on medicines that offer advances within treatment where absolutely no adequate therapy exists.

Over the authorization procedure, FDA authorities analyzed clinical reports from 2 studies involving 305 individuals (both adults as well as adolescents). They all had been identified as having GCTB which were recurrent, inoperable, or even where there would be a serious chance of death following surgical treatment. The growths could be calculated in 187 from the 305 patients. 47 of these experienced a decrease in tumor dimension after 3 months on Xgeva. Throughout a 20-month follow-up period of time, growth happened in 3 patients in whom the tumors shrunk throughout treatment.

The most typical unwanted effects related to Xgeva treatment was joint pain, fatigue, head ache, back pain, extreme discomfort and nausea or vomiting. The most severe unwanted effects were inflammation/infection of the bone fragments and osteonecrosis. Xgeva puts the fetus at risk and hence reproductive aged women should make use of effective birth control.