How Your Health Falls with Your Rising Weight?

Several people in the different countries are facing the problem of obesity. Being obese is not that serious problem but due to this there is a possibility of getting number of serious health issues. Basically, the term obesity refers to the amount of excess fat in the body. 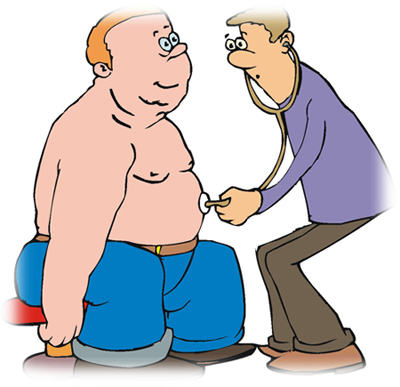 A person is said to be obese when he or she has 20% more weight than the normal weight of the body. Obesity can affect the physical appearance badly and also cause lowering down the self-esteem. The obese people are prone to chronic diseases more than people having normal weight. Many people try to get rid of obesity by doing different surgeries, but that is not an option. Right diet along with the proper exercise can help you lose the weight.

There are many health issues related to obesity and they are:

High Blood Pressure Along With Heart Disease: Most of the obese people seem to have the problem of high blood pressure and if it’s not controlled on time it can lead to severe heart disease and stroke as well. The obese person faces difficulty while breathing even after running a short distance. Reduced blood flow increases the chances of getting Angina i.e. discomfort or a heart attack. Also, being overweight, the oxygen that reaches to the heart of the person is less due the excess fat that is present in the body.  Heart failure is also seen in obese people as the heart fails to meet needs of blood of the entire body.

Diabetes: Overweight people develop higher chances of getting type 2 Diabetes which can lead to have strokes, heart issues, blindness and even early death. The body of obese people gets used to insulin and can resist it. Insulin is responsible for controlling the sugar levels in the body and initially body produces the excess insulin level and reacts to the situation and later body fails to produce insulin and increased sugar levels can cause damage to the body.

Damage To The Joints: Due the pressure of the weight of an obese person the joints of the body that gets affected are hips and knees. It is called as Osteoarthritis. It can cause the inflammation and wear of those joints which ultimately results in pain. The excess weight of the person puts more pressure on the joint which make them damage. One can have an excess strain on the back and that cause slip disk and similar problems with less mobility.

Breathing Problems: In obese people, fat is seeming to get collected in the areas of the tongue and neck which cause obstruction of the air passages. When a person sleep on a back, the obstructions trouble the person more and one can develop breathing problem and does not allow him to sleep peacefully.

Stroke: Obesity can lead to cause plaque in the arteries. Sooner or later the region of plaque gets ruptured which causes clotting of blood. If the blood clots are near the region of the brain, it obstructs the blood flow and oxygen to the brain which results in a stroke.

Excess Blood Fats: Overweight person can develop abnormal level of fats in the blood. These fats include higher level of triglycerides and increase the LDL cholesterol by reducing the level of HDL cholesterol.

Cancer: Obese person can develop the risk of getting different cancers such as gall bladder, breast, colon and endometrial cancers.