In addition to making your food tasty, spices are known for their medicinal benefits. All of us remember drinking a warm glass of milk topped with turmeric or saffron when we suffered from bacterial or viral infections as children. 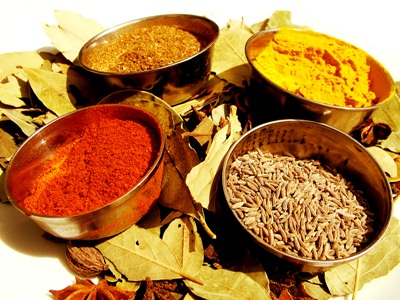 The saffron and turmeric added to milk is not merely a pain relieving measure but it is anti-bacterial and anti-fungal. These virtues alleviate fever arising out of such infections.

Thus the use of common spices in curing simple diseases and infections is very well illustrated through several everyday examples. What all of us have to open up to is the use of these spices and condiments in stopping those malignant cells in the body which surely mature into unstoppable cancer cells. The use of spices in preventing cancer has been extolled in various scriptures and Ayurvedic transcripts. Let us have a look at these medicinal virtues in greater detail:

Turmeric, the king of Asian spices is very well known for its antiseptic and anti-inflammatory properties. The polyphenol Curcumin present in Turmeric has been studied and its effect on retarding the growth of cancer cells, especially those found in prostate cancer, breast cancer, pancreatic cancer and leukemia has been recorded as well.

Turmeric induces cell suicide or programmed cell death scientifically termed as Apoptosis which kills the cancer cells without harming the healthy nearby cells and tissues. Along with adding the zesty, peppery flavour to our foods, Turmeric adds to quite a medicinal advantage!

Saffron is known for its exquisite fragrance! It is also known to be the most expensive spice in the world. About half a kilo of saffron strands are obtained from around 250,000 saffron flower stigmas. However, scientists around the world are floored by the benefits a few strands of saffron have to offer.

The core cancer fighting ingredient in saffron is a natural carotenoids dicarboxylic acid called Crocetin. Crocetin not only halts the progression of cancer, it also decreases the tumour by almost half of its original development. It thus is known to guarantee a complete goodbye to the emperor of maladies.

Fennel is best known to make its grand entry before the main course in starters like tomato-fennel soup with garlic or fresh salads with fennel bulbs. What is special about fennel is that the emperor of maladies – cancer, has to accept defeat when it encounters fennel. The main constituent of fennel Anethole restricts the invasive properties of cancer cells. It actually acts upon the enzymatic back-up action of cancer cells in invading the healthy cells of the body. It thus suppresses cancer cell multiplication and promotes healthy tissue growth.

Oregano makes a grand appearance as a pizza or pasta topping and we all sure love it. What makes oregano medically special is the presence of the strong and potent phytochemicalQuercitin. Quercitin is known to restrict malignant cancer cells in the body, especially those present in prostate cancer. These anti-microbial actions of Quercitin have gained the favour of several scientists and doctors!

We all know what a good food preservative cinnamon is. What we should also know is that cinnamon is rich source of iron and calcium and it reduces tumour growth by blocking the formation of new vessels in the body!It takes only about half a tea spoon of cinnamon in our meals everyday to keep the demon of cancer away.

This amazing herb has potent anti-oxidant properties thanks to the presence of the core ingredient thymoquinone. Thymoquinone halts the proliferation of prostate cancer cells in the body. Thus, along with being a good digestive, cumin is also a potent anti-cancer agent that must be involved in our foods on a daily basis.

Who is not acquainted with coriander seeds in our foods? We, in India use coriander seeds as a ground powder which makes its taste felt in chutneys, curries and marinades. We all know its benefits in aiding digestion and as being an anti-inflammatory agent. It alleviates the symptoms of arthritis and protects against urinary tract infections.

Its unique properties of controlling blood pressure and increasing the production of high density cholesterol have made it popular among doctors. It also halts the proliferation of cancer cells and that makes its effective against the deadly disease.

It induces apoptosis thereby killing the leukemia cells while keeping the surrounding healthy cells intact. Thus chilli peppers are known to keep cancers like leukemia in check and reduce the size of thetumours. Thus, it is good to have a bit of fire in your food and your belly.

The culinary benefits ginger has to offer in terms of the taste, flavour and consistency are universally understood and respected. Ginger enhances flavour and can be added to preparations of vegetables, meat, fish and poultry. So to sum it up, ginger is a potent cholesterol lowering agent, assists in boosting metabolism and helps in killing cancer!

Clove is another spice that can be added to any preparation, especially non-vegetarian delicacy preparations. It is vital for us to understand that clove added to water can treat stomach upsets, nausea and diarrhoea. Clove has a unique ability to prevent cancer.

Other spices like anise, basil, caraway, fenugreek, mustard etc. are also known for their able cancer fighting properties. What’s best is that these spices can be added to any vegetarian or non-vegetarian preparation. Proper usage of these spices in foods can prevent various diseases and problems affecting your health. Add these to your foods in the right proportion and see the magic unfold on the dinner table!