Wilson’s Disease: What Are The Causes And Symptoms?

Copper is an essential chemical for our body. It helps in metabolism and also plays an important part in the functioning of the body. The body gets the chemical from various foods; the excess of which is removed by the liver. 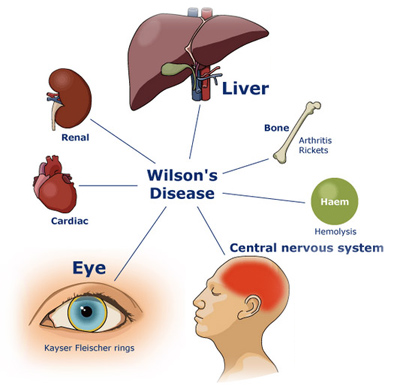 But, there are few who suffer from Wilson’s disease. This is a condition when the body starts to accumulate the excess of copper. This excessive copper can cause various health problems, mostly to the liver, brain and other vital organs. It is basically a genetic disorder and starts accumulating immediately after the birth.

The main build up of copper is caused at the brain and lever. This accumulation then causes various troubles and problems related to the organs.

As we said that Wilson’s disease is a genetic disorder. It moves from generation to generation. The main reason is the genetic mutation. This is a condition where a person inherits an autosomal receive trait; which means he/she has to inherit two copies of the defective gene one from each parent. In case, if you’ve received one gene then you won’t be affected from the disease rather you’ll become a carrier; which means you can pass this on to the next generation.

Due to this mutation, the problem with protein arises which is responsible in shifting excessive copper to the liver. We all receive the copper from the foods we eat. Normally, people take more copper than needed. The liver takes the amount of copper required to perform the daily task and releases the excessive ones. But, those who’re suffering from Wilson’s disease, fails to get rid of this excessive copper. These copper gets deposited in your liver and later on cause damage to your organ.

With time, these excessive copper may start to leave the liver starts building up in other vital organs of the body; mostly eyes, brains and kidneys.

Normally, Wilson’s disease produces varieties of symptoms which are mistaken with other problems and diseases. Following is the list of symptoms:

Above mentioned are some of the common symptoms of the Wilson’s disease. It is better that if you get any of these symptoms; along with other diseases get yourself checked for the excess of copper. It is always better to get the treatment before it goes beyond control. So, all you’ve to do is watch yourself and make sure that you are fit and healthy.