What is Peptic Ulcer Disease?

A peptic ulcer refers to a break in the internal lining of the esophagus and duodenum. Ulcers occur when the lining of these organs is deteriorated by gastric acid which is released by the cells of the stomach. Peptic ulcer disease is a common ailment which affects millions of people every year. Furthermore, peptic ulcers are recurring in nature and even healed ulcers can reoccur unless preventive treatment is used. 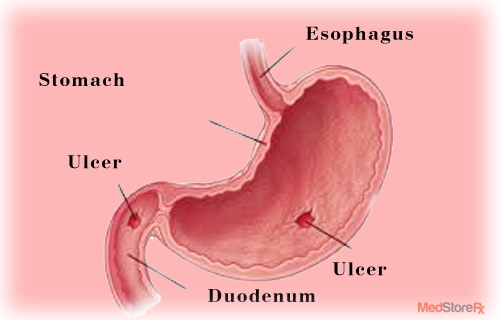 Increased level of gastric acid is one of the factors that causes peptic ulcer. There are other two types which are also said to cause the disease, these are infection of the stomach by the bacterium known as Helicobacter pyloricus (H. pylori) and continuous use of NSAIDs (non-steroidal anti-inflammatory drugs). Smoking is also said to cause ulcers.

Infection caused by H. pylori is common. It affects more than one billion people in the whole world. It is forecasted that about half of the U.S. population older than 60 years have been infected with H. pylori. The infection typically persists for a long time before it causes the ulcer.

NSAIDs are medicines which are used for the treatment of inflammatory conditions such as arthritis in the body. Naproxen, aspirin, ibuprofen and etodolac are some of the examples of this class of medicines. NSAIDs interfere with prostaglandins (Substance that resist damage to the stomach caused by the acidic digestive juices).

Smoking cigarettes increase the risk of not only contracting ulcers but also the complications caused by ulcers such as perforation, stomach obstruction and ulcer bleeding. Smoking is also a leading cause of treatment for ulcers not being successful.

Symptoms of peptic ulcer disease are varying. Some ulcer patients experience minimal dyspepsia, abdominal irritation after meals, etc. Some suffer from feelings of sharp discomfort in the stomach two to three hours after having their meal or in-between the night. The symptoms often are quickly calmed by certain food or antacids that counterbalance stomach acid.

Some people continue to feel pain even after complete healing of the ulcers. Others have no pain at all. Ulcers are often recurrent, spontaneous and insidious, except if any serious complication occurs.

This gastrointestinal X-ray is easily performed and has no discomfort or risk. Barium is a calcareous substance which when swallowed checks for the presence of ulcers by showing an outlined x-ray image of the stomach. However this type of X-ray is less precise and ulcers may be missed sometimes.

An Esophagogastroduodenoscopy is a much more accurate way than barium upper gastrointestinal X-ray. The patient is sedated and an endoscope is inserted through the mouth to inspect the duodenum, stomach and esophagus. In some cases the biopsies are also done to test if the patient has H. pylori infection. Biopsies may also be analyzed under a microscope to check whether a cancerous ulcer is present. Some gastric ulcers may also be cancerous hence biopsies are done on gastric ulcers.

The focus of treatment of ulcer is to cure the disease, alleviate pain and preclude complications. It starts with reducing NSAIDs’ use and cigarettes. It is followed by usage of relevant medicines.

Antacids are used to negate of effects of gastric acid. Antacids are effective and safe treatment. However, these need to be taken at short intervals as their action does not last for a long time and regular dosing is needed. Ulcers often recur when usage of antacids are stopped.

Studies show that histamine (a protein) when discharged in the stomach causes secretion of gastric acid. Medicines known as H2 blockers are designed to reduce or stop histamine’s mechanism of action on gastric cells and lessen the production of gastric acid. H2 blockers while being useful in the treatment of ulcer healing, have a somewhat small role in eradicating bacterium (H. pylori). Usually histamine antagonists do not cause complications even when used for a longer time and may lead to a few benign side effects. Rarely headaches or hallucinations are reported by patients.

Side effects of PPIs are not commonly seen; there may be some cases of diarrhea, nausea, constipation, headache and rash. Proton-pump inhibitors are said to be safe even when used for a longer time without any serious health effects.

Sucralfate and misoprostol are ingredients that make the gut lining stronger which defend it against increased attacks by acids in stomach.

There are no decisive evidences supporting that restrictions in diet may act in healing of an ulcer. However, since coffee causes discharge of gastric acid secretion and alcohol may cause gastritis, reduction in the consumption of these two is recommended.