Dengue – Cause, Symptoms And Tips To Prevent

Tropical and subtropical nations are being affected by this fatal infection. Dengue basically is a mosquito-borne contamination causing a severe flu-like illness. It is potentially also responsible for a more lethal level named as severe dengue. The incidences all over the world have almost doubled, putting at least half of the world’s population at danger. 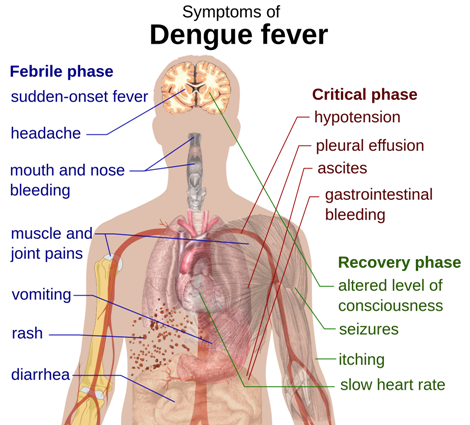 First recognized in the early 1950’s, during the epidemic that swept across Philippines and Thailand, today it is a cause of hospitalization and early death amongst children and adults alike around Latin American and Asian countries.

The main vector responsible to transmit the virus that lead to dengue is the AedesAegypti. The female Aedes mosquito delivers the viruses onto human beings through their bite. Once the human is infected they naturally become the main carriers and multipliers of this virus.

The virus begins circulating into the blood stream of the infected person for around 2 to 7 days which is approximately the same time that the person develops fever. There is no vaccination. But recovering from one dengue virus gives a lifelong immunity against that specific serotype. However, this isn’t full proof since there are three serotypes of the virus.

The symptoms involved in this disease are flu-like signs. The clinical properties vary according to the age-group the patient belongs to, suspecting a high fever accompanied by either nausea, vomiting, muscle pain, rashes or swollen glands.

If the symptoms persist for more than a week and all the previously mentioned signs cease to stop adding rapid breathing, bleeding gums, blood infused in vomits and constant fatigue then it is a case of severe dengue which calls for proper medical care in order to avoid the risk of death.

The most important step towards prevention from the dreadful illness is to control the root cause. Preventing or lessening the transmission depends in making sure these mosquito vectors deplete and somehow the human-vector connection is interrupted.

If the control activities are targeted at the immature state of theAedes mosquito, the human contact with them would be better off. The prevention measures are simple forms of cleanliness in both man-made and natural containers where the little demons exist.

Try incorporating clothing that makes skin exposure minimal during dawn and dusk when the mosquitoes are most active. If you have stepped out of your house, try keeping a repellant handy. But do make sure you follow the label instructions and do not overuse the repellant.

Mosquito nets treated with insecticides act as an affordable method of protection. When you have done every bit to keep those mosquitos at bay and they still manage penetrating into your homes, try using household insecticides, coils, aerosol products and insecticide vaporizers.

Door screens, window guards and air-conditioning also reduce biting. Be wary of water based habitats within your homes and around it. The tiny demons breed in standing water. Thus constantly shake them off from garden planters, toilet pots, water storage jars, basins, choked gutters and ground depressions. These are bound to be found in unexpected corners.