What Are The 7 Stages Of Grief?

Everyone has a scenario in life whereby one may lose forever a personal relation, a business that was making you profit, someone dear or even a friend who you are not in touch with anymore! 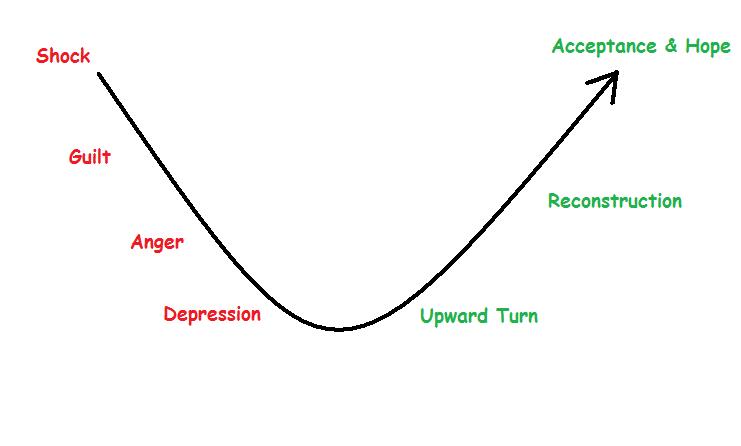 These are nothing but those episodes whereby you have to start living sans something or someone who you were extremely fond of and thought wouldn’t be able to do without! But however, life turns around and mishaps happen! It is the rule of the nature that one has to move on to a better beginning again! But however, is it that convenient to start a fresh?

Here come the 7 stages of grief that one goes through before he plans to take up a fresh start or may just have the 7th stage of grief geared up on him all his life!

The first stage of grief is characterized by immense shock or disbelief of a fact that has taken place! Some people may just become too numb with the disbelief of the fact of someone who has died or the loss of something that meant everything to them. This is the first stage which could emotionally ruin a person’s mind and can have various side effects that can hamper the overall being of the person.

The second phase features denial! It is obvious that something you don’t wish to believe is what you are going to deny in the very first place! You just do not wish to accept a fact or a happening in order to get under the circumstances’ negative conditions! Refraining from it and running away is usually what people do in the 2nd stage of grief!

Bargaining! Well not literally but yes this is the third stage in the grief process! It is obvious you would want the almighty to reverse the action in place of something else surrendered for it! This is what the 3rd stage of grief is all about.

The fourth one is guilt! It is the guilt that seeps in to some people that makes them believe that something happened due to their presence or something took place because it couldn’t be helped enough by them!

Anger – this is the fifth stage whereby being helpless and no effort that can heal up anything tend to work out! All that is happening is – is the mindful anger that is giving one the emotional distress

The sixth stage of grief is the depressed mode in a person’s life! It is this depression that takes over one’s life on a patch whereby depression can make you a reverse of the person that you otherwise held. It is generally featured by day dreaming and regret as well as sadistic memories of the loss.

The seventh and the last phase of grief includes acceptance of reality as well as hope for a better tomorrow this is usually because the person has no option to accept the law and rule as well as the happening of the nature that cannot be reversed by any one and has to be felt by mankind in some or the other way!