Ways To Prevent Someone From Suicidal Attempts

Life is precious and its every moment is important. There are few people who think of ending this because for them, this is the only option. These people are the people who’re suicidal. They might be depressed or stressed. They won’t ask for support but they surely need it. 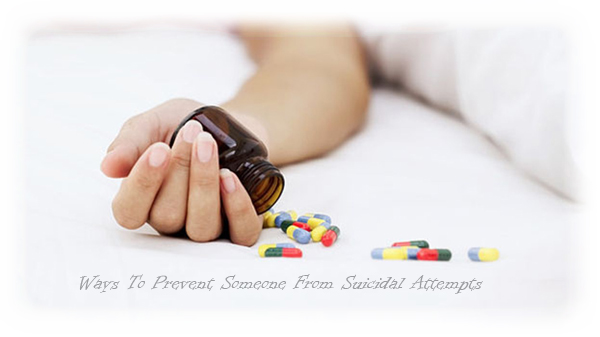 According to the reports by the World Health Organization, approximately 1 million people die every year due to suicide. Now, this is quite shocking as what makes them to do it. Although, there might be various reasons for it, but there are a couple of solutions to the problems. These solutions could help a person who is suicidal and can help him change his mind.

Dealing with people who are suicidal is not tough. You just have to follow the steps properly. The first and the foremost thing should be to understand the signs and symptoms. Following are certain symptoms which might help you understand the attempts.

1)  A person would start to make his sentence as ‘I wish I hadn’t been born’, ‘Hope to see me alive’, ‘I don’t see a way out’ and all. It is not necessary that the person would say it in serious tone all the time. Sometimes, few say it jokingly. All you have to do is catch those terms and signs.

2)  The person would start calling out relatives and friends without any occasion and would start saying ‘Good Bye’ as if there is no tomorrow.

3)  Some people would start paying off the bills in advance, giving the prized possessions and even making a will.

4)  There might be a few who would like to cut down all the connections with family, friends and society.

5)  If you happen to find a person suddenly calm or happy just after the depression phase, then this can be a sign that he/she has decided to end their life.

6)  There are few who express themselves creatively. You might you’re a person either writing a poem or story about death or suicide. It is the time that you should understand that he/she is getting suicidal.

7)  Some people become self-destructive. This means, they would try to kill themselves by various means; for instance, by driving fast, having unprotected sex, overdose of drugs or excessive drinking.

Once you’ve got hold of the symptoms and understood that the person is getting suicidal and can kill him/herself, the next step would be to go and speak to them. We might have a myth that those who’ve decided to kill themselves don’t need anyone’s help. But in reality, they don’t want to die till the end moment. All they want is to end their pain or trouble. They might be expressing themselves but they want a helping hand; which can pull them off from that trouble.

This can be a little tough for a person to speak to the one who’s suicidal. But then, there are certain things which one can keep in mind and things could be smooth and easy.

1)  You’ve to speak to the person about his/her discomfort. The person might not open up easily but then all you’ve to do is make him/her speak about it. For them, there is no end to their solution. While you’re having a conversation with them, understand the problem and try to show them that there is still hope. Once you’ve shown them a hope, they might quit their decision of dying.

2)  Another thing that you could do is to talk about death. Nothing to worry about it. Experts say that when you speak about suicide or death to the person who wants to end his/her life, they might get scared of it and can quit the decision. Remember, they don’t want to die; they just want to end their pain.

3)  You can also ask them about their plan of dying, as in when they are planning to end their life and how. This way, you could prepare yourself mentally and can precautionary measure to stop them from doing it. All you have to do it play safe.

4)  If you think that the situation is way beyond your control then take them to a counselor or therapist. They are expert in dealing with cases like this. They might be the greatest help in throwing out the decision of suicide from their mind.

Ending the life is never an option to end the problem. There is always a way out of the problems. All one has to do is look around to find the solutions to the problems. This is what you’ve to show to the people who think that their life is not worthy and they should end it. Teach them to never leave hope.