Dermographism: The Reasons And Solutions

The skin disorder better known as skin writing is one of those ailments whereby the causes may be unknown and thus to detect it and even treat it completely, calls for hectic and microscopic efforts. 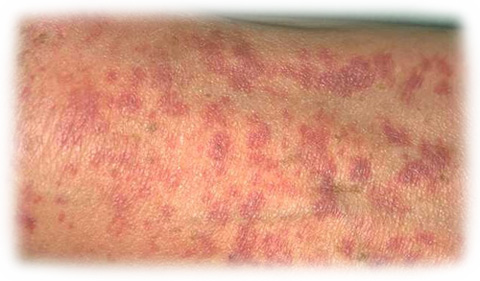 The red welt that occurs on a patch of the skin, when scratched and settles off in half an hour’s time; may be seen as a general allergic reaction and may not be given much heed to, especially in today’s over-the-top busy scheduled peoples’ lives. ‘Must be a sunburn or may be some allergy or you probably ate something wrong that doesn’t suit you or could be the pollution’ are the possible assumptions that one makes or receives in interrogation from family pupils and pals. But however, ever thought it could be something weighty that requires your attention?

Are you exposed to extreme temperatures or even putting up with tight fitted garments, watches and spectacles?

Yes, you could be victim to dermographism if your skin which is a sensitive sensory organ may be exposed to extremely hot or extremely cold conditions. Even those trendy body hugging tops and jeans you shopped for could be reasons of giving you some ‘red writing on the skin’ and though such a disorder is not contagious or life threatening, but however it may be incurable and shall be a part of you, lifelong.

Emotional and psychological conditions, depression and stress bouts could also result in this disorder which is most commonly observed in younger people in the age group of twenty to thirty years and may be a shameful and disgraceful event in their life. Such a visible ailment may grab away the confidence from these young adults and can also be an incident of dismay in their lives.

A possible treatment that could relieve some completely and others partially is the usage of antihistamines which are doctor prescribed and an advice of disposure from the hot sun and cold atmosphere may also help in the control of dermographism. General precautions of warm water baths, moisturizers and skin friendly fabric need to be kept up with.

Acupuncture It!
Acupuncture has helped provide great relief to a lot of people suffering from visible and embarrassing dermographism marks and rashes. Something that probably medication cannot cure completely can be cured off with needles pricked in to the derma, almost completely.

Dermographism assumed to have stemmed up from weak immune systems, is seen to create an irritating interference in the regular routines. Vitamin C which is contained plenty in fruits like oranges and lemons – citrus fruits as well as Noni juice is also said to work well for treating those red waves, which may however, not go off completely.

As much as the hives are triggered by any pressure that breaks out on the skin; the patients see the brighter side of it in terms of ‘paper skin’ that enables them to write on their own skin! Thus not really seen as a curse but however may be a slow poison for people suffering from it in deeper concentrations.